Pick up your game... 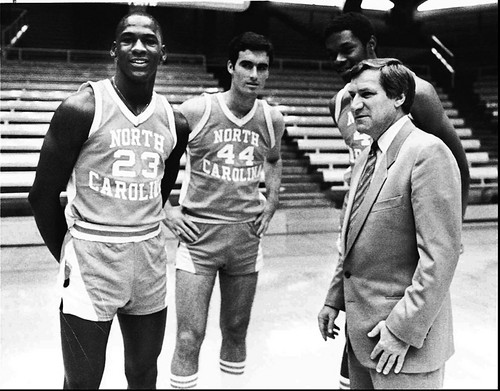 Dean Smith had a philosophy that a basketball program's
responsibility in the off-season is to the individual, and in season, every member's collective responsibility is to the team.  Clearly, working on one's body and skill set, or having a player-centered focus in the off-season, ultimately is an expression that helps the larger whole actualize it's potential when it matters most.  But, Dean Smith believed so deeply in his responsibility to the individual that he had a reputation for selflessly advising and aiding his players through the NBA Draft process.  Standing to benefit if an All-American were to return to school, Smith would instead send twenty-five first rounders to the NBA, five of which would be Rookie of the Year.

This philosophy brings to mind the plethora of ways a player can improve himself through the off-season.  Much of what BSMPG
offers are cutting edge philosophies and dialogue to jump start a player's physical and mental maturation albeit through nutrition, treatment, or training both on and off the court.  In earlier articles we spoke about the need to train with the game in mind, and Art Horne spoke at length of The Talent Code and the lessons one can take away when engaging in deep and mindful practice.

Horne raises an interesting argument acknowledging the shortcomings of summer pick-up games on collegiate campuses.  As
college coaches must maintain a hands-off approach in the summer time, the quality of games can suffer, poor habits can be instilled, selfish play can rule the day, and a risk of injury always exists.  I, on the other hand, place high value on summer pick-up games recognizing, much like Dean Smith, the off-season is for the good of the player, in-season all is for the team.

In my initial article Training with the game in mind, I argued for a clear understanding of how a particular exercise in the weight
room relates to improving your overall game. In the case of summer pick-up, I see no difference.  There needs to a clear understanding of its actual value to the development of the player. Can pick-up reinforce bad habits? Of course.  If players were always fundamentally sound, college coaches would be out of a job.  Risk of injury?  Well, that risk exists in every corner of life.  Does it promote selfish play? Perhaps.  With maturity, a veteran group can grow out of the cattiness.

It's greatest value lies in what it reveals.  Plato's famous quote
says it all, "you can discover more about a person in an hour of play than in a year of conversation." This speaks volumes about the opportunity pick-up presents.  Players learn a little something about each other.  Who can they attack?  Who can they trust to make a play? Who will be competitive enough, despite the summer heat, a questionable foul call, a previous argument about the score, plans later in the evening, or any other "obstacle" under the sun to make game changing plays.  In the end, if a player is expected to make a game winning shot in-season, he needs to have made dozens of game winning shots in the summer time. You can't tell me there isn't some form of a correlation.  What happens in the instance where a player is picked last?  Does that not resonate
with them? Perhaps drive them and shape their latter workouts, training, and desire?

There are intrinsic elements of pick-up that have value.  First off, players love to play.  Its simple, but cannot be overlooked.  Whether coming out of your ideal offensive system, or the mosh pit possessions that pick-up can be, players love to go at each other.  Allow them to embrace this and take some pride in merely competing. Second, its a chance to put them in positions of pressure all year long.

At Northeastern University, our senior class instilled a rule in which the player who scores on game point must follow the game-winner
with a made free throw whether fouled or not. Step to the line and follow your game winner with another one. If you miss- play on. Lastly, defense calls fouls. I've discovered no better way to clean up the quality of pick-up games than to put accountability into
the defense's hands. Sounds counterintuitive, but the game regulates itself. Drive to the hoop and your hacked? Big deal. Be physical on the other end and you're even. There are no opportunities to alpha-dog a freshman with mysterious foul calls. The intensity of competition instantly picks up.

Are the game conditions, efficiency and team play less than ideal in summer pick-up? No question. But a lot can be learned from
playing with your teammates. Like any training or practice players can't simply talk about it, they have to be about it. They can't go through the motions. Do it right and recognize it's value. Allow teammates to challenge each other and enjoy doing something they might not be able to do forever- merely play the game.