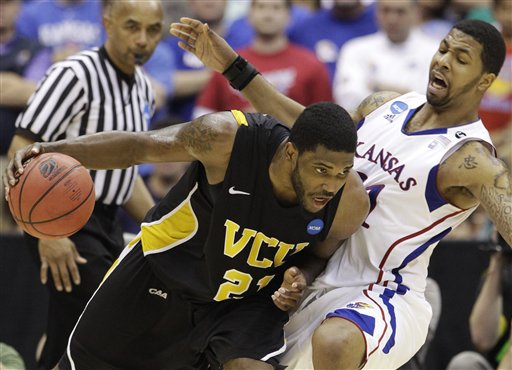 March Madness offers some of the best unscripted drama in the entertainment industry.  Movies and literature would be critically chastised for overdoing the amount of plot twists and surprise endings the real life theatrics of our nation’s NCAA Tournament produces nightly.

The Cinderella stories are compelling.  America is a sucker for the rising underdog.  I’d be remiss if I didn’t note my tremendous respect for our conference rival VCU.  Excuse the tangent, but their run has been fantastic for the Colonial Athletic Association.  And are CAA teams really underdogs at this point?

Stew on these numbers for a moment.  Since the 2006 NCAA Tournament, the CAA is 4-2 vs. the Big East, 3-0 vs. ACC, 2-1 vs. the Big Ten, and a combined 2-2 against the Pac 10 and Big 12.  The CAA is a combined 11-5 vs. BCS conference foes over the past five seasons.  News flash to
prideful “expert” analysts… when the CAA has more than twice as many wins as losses against powerful high-majors its not twice as impressive they’re capable, you’re twice as wrong when you continue to devalue this league and question a CAA at-large bid.  If we’re pointing to numbers and figures such as SOS and RPI to keep VCU out of the tournament, can we instead point to the numbers above to keep the mid-major at large bids coming?

College basketball is not governed by algebraic logic.  That A is greater than B, and B is greater than C has no bearing in a match-up of A vs. C.
University of Richmond defeating VCU 72-60 in December, and Kansas vanquishing Richmond 77-57 meant nothing in a match-up of Kansas and VCU with a trip to the Final Four on the line.  RPI and SOS are completely irrelevant when the moment demands you rise to the occasion and play. The CAA has done that, time and time again.

What makes the tournament so memorable, Cinderella and heavy favorite alike, is the fantastic moments of delivering under so much pressure.  Few people will ever dare to test themselves the way these kids are tested. To hone in, feel the fear of failure, ignore it and produce on a national stage is awe inspiring.  While I’m passionate about the CAA’s tournament success, perhaps the greatest performance of the entire month of March took place without you even realizing.

In the Division II national semifinals between BYU-Hawaii and undefeated West Liberty, BYU-H guard Jet Chang put on one of the greatest performances you can imagine.  West Liberty came in 35-0 and it was going to take a special effort from BYU-H to overcome the multiple weapons the WLU Hilltoppers boasted.

How impressive was Jet’s performance?  Forty-three points on 14-17 shooting 7-9 from downtown and 8-9 from the line.  Those are videogame numbers. (Enjoy it here – just simply sign up and access it via Internet Explorer - http://nbasst.com/s/?id=X6XLQ2FMDHM6BKJT9XM2KHG55X ).

He followed it up with 35 points in a three point loss in the National Championship game. When the moment demanded he rise, his focus was other-worldly.  In the Final Four he averaged 39 points and shot 73% from three.  Just ridiculous.

What kind of zone was Jet in? The experience, its definition and its conditions, vary slightly for everyone.  Simply put, you know when you're there.  And you don't arrive there accidentally. The zone is a mental state, often credited first to Mihaly Csikszentmihayi, of energized focus, full involvement, and success in the process of the activity.  It seems to involve a measure of proper pre-game preparation, determination, and proper game circumstances. Feeling like your jump shot is working is useless if coach has you sitting next to him.  The experience of being in the zone begins to snowball with each game possession and suddenly the rhythm of the game is easily tuned to. You make the right pass, the proper box out, the defensive rotation the team needed and everyone’s favorite part, you feel like you can't miss. Watching Jet in the zone was compelling drama, perhaps the most compelling of the entire NCAA Tournament. So many players have raised their level to provide special performances. Arizona's Derrick Williams may have skyrocketed himself into the top overall draft pick and Kemba Walker has exemplified leadership, big plays and fight. But Jet rose to the moment in the national championship game. The biggest moment his level can offer. As we watch the Division I Final Four this weekend, we'll see other great players raise their game to the moment as well. Just know, it's not by accident. Preparation, potential, and focus mesh to create special performances under heated circumstances few people will ever face.  Enjoy the moments and unscripted drama.