A Better Way To Chop - From The Ground Up

Many athletic trainers, physical therapists and coaches will advocate the in-line lunge position for both the chop and lift exercises with emphasis placed on both the in-line foot position along with a vertical tibia and torso as the optimum position to perform this activity.  Although this may be a good starting position to teach the chop as a stability exercise, it may not be the very best position to emphasize the dynamic hip stabilizers and therefore fails to have the greatest carry-over effect to other similar lunging and single leg exercises and ultimately the playing field.

By adopting a position which requires increased levels of hip musculature effort and dynamic stability, this exercise may not only teach appropriate hip and torso position, coordination, and neuromuscular strength but may also serve as a starting position for teaching all split squat and lunging progressions while utilizing the front hip as the primary mover while minimizing the involvement of the back leg.  As previously mentioned, the traditional in-line lunge position with a vertical tibia and torso along with 90/90 positions of the hip and knee serve to promote a challenging teaching position for the Chop exercise while inherently limiting how much external load an athlete/patient can move with good form.

What this position also limits however, is the amount of involved “dynamic” front hip musculature activity which is obviously required further down the road during both advanced strength movements and on-field maneuvers .  By progressing this exercise from the traditional half kneeling position to a very similar yet more challenging “Hip Dominant” chop serves to not only involve additional hip musculature, but also as a starting point from which to develop and groove a proper split squat pattern. 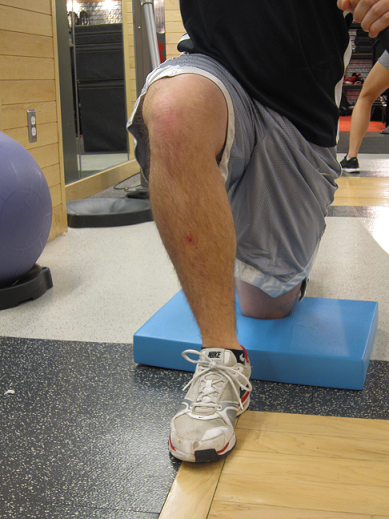 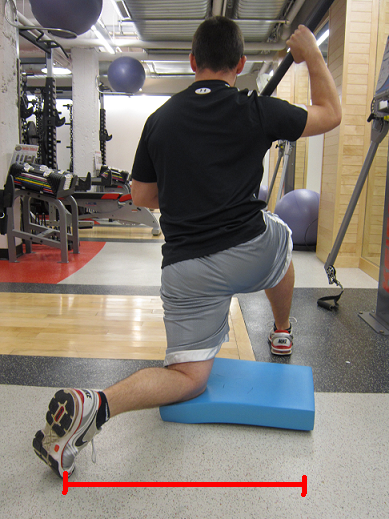 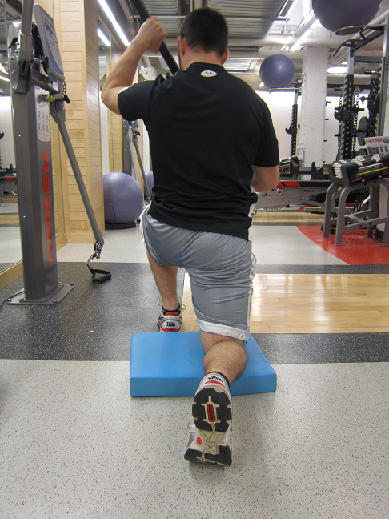 A Better Way To Chop - note position above

Progressions for teaching and advancing the Chop:

1. Start in lunge position with right foot forward and left knee down.
2. Hips should be square and perpendicular from cable system so to not have right leg abducted and externally rotated and the left leg abducted and internally rotated (with lower leg kicked out providing unwanted artificial stability) (insert picture here)
3. Patient/Athlete should “load” their right hip and glute by leaning slightly to the right.  This is the most important point while teaching this position and cannot be overlooked or underappreciated.  Without the appropriate amount of lateral shift, the supporting hip will simply rely on its static stabilizers to hold this position, limiting the contribution needed from the targeted dynamic stabilizers and specifically the glutes.
4. Body weight should be over the middle of the front foot with the toes extended under the back foot so to position oneself at the bottom of a perfect split squat.
5. Because of varying tibia and femur lengths, everyone’s position will be slightly different but everyone should answer the same way when asked, “Where do you feel your muscles working?” (Answer: glutes!) and have an angled front tibia as opposed to the 90/90 position so often taught.
6. Not feeling your hip musculature working? Try leaning a bit more laterally.  Because this will be a new position for most people, especially for those that do not engage their hips well (dynamic stabilizers) to begin with, many will avoid positioning themselves in this position due to the inherit ‘instability” associated with it – remember, you’re not jamming the head of the femur against the acetabulum and hip labrum anymore utilizing your static stabilizers to hold yourself in place.
7. Try also placing a Valslide or other 2.5 pound plate under the toes of the front foot to further emphasize the mid-foot pressure and hip activation.
8. Proceed with normal Chop mechanics – pull to midline and push away in two distinct movements so to cross the midline of the body.
9. Always have your athlete/patient rise out of this posture after their last rep to further cement this movement pattern and bridge your progression from a static chop exercise into your split squat exercises.

From The Ground Up…

Since we all started locomotion from the ground up, it might be worthwhile revisiting this initial position in an effort to get back to a more efficient way of moving.  Many physical therapists and movement specialists already suggest teaching the traditional squat pattern from the ground up for those having difficulty with this pattern.  I would suggest a similar approach in an effort to re-establish the split squat and lunge movement sequence.   By doing so, you’ll be loading the front hip in a single leg emphasis movement and lengthening the hip flexors of the back leg all while moving in a spine sparing strategy.

1. Half-kneeling – Hip Dominant - lunge position to standing position (start in kneeling position to teach patients and athletes how to properly move from this position and not from the traditional starting position)
2. Split squat
3. RFE split squat
4. Reverse lunge
** during each single leg exercise, emphasis should be placed on establishing a “Hip Dominant” position while pushing through the front foot/hip and minimizing any contribution from the back leg.

Establishing the Hip Dominant position is a small change but one that can certainly alter the entire course of your training or rehab  and ultimately how your athlete/patient will approach and succeed (or fail) with similar movements involving the lower extremity.  Imagine the impact you’ll have with a patient or athlete by engaging their active hip “stabilizers” from day one instead of having them rely on a static stabilizing system (anterior hip capsule and labrum).

The devil’s in the details.

The Chop exercise along with progressions and advanced movements based off of the traditional split squat are clearly worth doing both from a rehabilitation and advanced training perspective and thus should be done with the greatest coaching and attention to detail as possible.  Believe me, your patients/athletes will notice the difference immediately – during their activities of daily living, movement efficiency on the field, not to mention a little bit of glute soreness the next day reminding them they’ve done it right.

Thanks to Sarah Cahill, Strength and Conditioning coach at Northeastern University for her insight and coaching help.