Must Reads For The Basketball Strength Coach 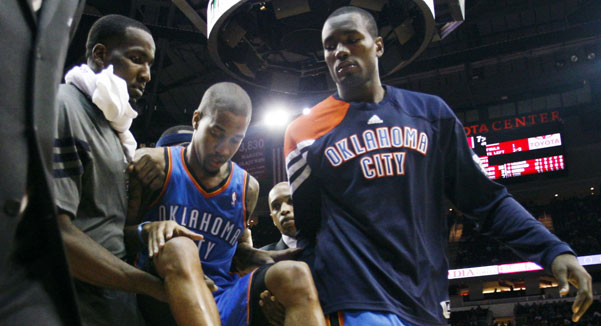 Basketball is a popular and competitive team sport across the world with injuries commonly occurring.  Across all sports, there has been a recent focus on warm-up programs designed to prevent injuries.  The purpose of this randomized cluster trial was to assess the effectiveness of a warm-up program involving running exercises, strengthing, balance, jumping and hamstring exercises, as well as speed training with sport specific changes in direction in elite male basketball players.  This warm-up program was previously proven to be successful in reducing the prevalence of injuries in a soccer population and the specific exercises can be found here.  Eleven elite men’s basketball teams (121 players) were randomized as a team to either the intervention (7 teams) or control group (4 teams).  The coaches and captains of the teams allocated to the intervention group were trained on how to perform a specific set of exercises that they would show their respective teams.  The control teams were instructed to warm-up as they normally would, and there was no standardization or instruction given to any of the control teams.  Injuries, body part, activity, and exposure hours were reported.  Throughout the course of the season, the intervention group had significantly lower overall injury rates (0.95 vs. 2.16), lower extremity injuries (0.68 vs. 1.4), training injuries (0.14 vs. 0.76), acute injuries (0.61 vs. 1.91) and severe (fracture) injuries (0 vs. 0.25) than the control group.

These findings have two important implications.  First, it may be important to consider an athlete’s sleep habits as part of the player evaluation process when considering to draft an athlete.  These findings suggest that athletes with high daytime “sleepiness” levels are more likely to not remain with that team in the coming years after being drafted, as such they are a low value.  Conversely, athletes with better sleep habits and low daytime “sleepiness” levels are a higher value pick as they are more likely to remain with their team that drafted them.  Second, the ability to quantify the level of “sleepiness” can be easily quantified using standard survey instruments.  Thus, this is an easy assessment to incorporate into player evaluations and recovery programs to ensure they are maximizing their athletic and regeneration potential.