Are you Qualified? Preparing Your Athletes For Rotational Exercises

In the vast majority of well planned programs in both Strength and Conditioning and Sports Medicine, athletes and patients must “qualify” for a particular exercise prior to being introduced to it as a formal part of their training or rehabilitation program.  For example, it would be ill advised to simply ask an athlete to perform depth jumps without knowing they had a sufficient strength base first (1.25 x BW for females and 1.5 x BW for males seems to be standard).  Hang Cleans are rarely taught until an athlete or patient shows proficiency in a box jump, good front squat technique and a reasonable strength base.  Even in Sports Medicine, one must “qualify” to drop the crutches after injury in favor of full weigh-bearing so long as they are abel to demonstrate normal, pain-free gait.  Yet, when it comes to addressing “core” exercises many are often prescribed without thought or prior planning.  This is especially true when evaluating rotational exercises.

McGill has demonstrated time and again that people with troubled backs simply use their backs more during activities.

“But you need a strong back don’t you?”

Well yes, but there’s more to it than that.  In fact, the guys that have these troubled backs most often have much stronger backs but are less endurable than matched asymptomatic controls (McGill et al, 2003).  In addition, those that have back pain (and a stronger back mind you) tend to have more motion in their backs and less motion and load in their hips.  And we all know what poor hip mobility means don’t we – you got it, back pain.  (McGill SM et al. Previous history of LBP with work loss is related to lingering effects in biomechanical physiological, personal, psychosocial and motor control characteristics. Ergonomics 2003;46:731-46.)

"So what does all this hip, back and stability stuff have to do with rotational core and power training? I just want to throw some heavy medicine balls against the wall and wake up the neighbors!”

Not so fast, as I mentioned, mobile hips and a stable and strong mid-section are paramount and a MUST prior to any type of rotational medicine ball or rotational power training.  The Mobility-Stability/Joint by Joint Approach to Training made famous by Boyle and Cook is of course a must, yet very few actually test to see if their athletes have “stability” where stability should lie – the lumbar spine. This is especially important for post players who require a decisive and strong drop step to establish position in the post. Any leakage in energy or disconnect between their shoulders and lower body will surely afford them a less than desirable position on the low post. 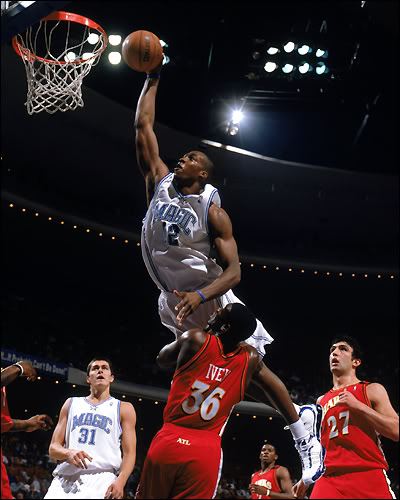 Isn't being on a poster great?

The simple “Prone Shoulder Touch” or “Prone Touch” is a simple test to ensure your athletes are able to lock in their lumbar spine while undergoing and controlling a very basic rotational force.  In this test the athlete is resisting rotary forces by picking one hand off the ground, touching the opposite shoulder and replacing.  If your athlete cannot hold their pelvis and shoulders level to the ground they are simply not ready to “produce” rotary forces due to the fact that they just demonstrated that they could not even “resist” a simple rotary force.  You wouldn’t depth jump an athlete unless they could produce the required force first right?

Remember, the core, more often than not functions as a preventer of motion and not as an initiator.  Good technique in both daily living tasks and sports demand that force be generated at the hips and transmitted through a stiffened core. (McGill, Ultimate Back Fitness and Performance)

Not sure if your athlete is holding their spine in place?  I often ask athletes to touch each shoulder 20 times total after lifting up their shirt and exposing their low back.  (Baggy basketball shirts and shorts won’t allow you to view and make an appropriate decision.) Being able to hold this position, and ultimately resist the 280 lb power forward trying to dislodge you from the block requires not only strength but strength that endures.  Twenty touches may seem like a lot, but dysfunction rarely presents itself at first, and requires a bit of fatigue before it jumps out at you.

Note: many tall athletes will automatically find this exercise to be difficult. Starting them on their knees or bringing them up to a box serves as a nice starting position.

Athletes that struggle to hold the Prone Touch position should start with simplier exercises such as McGill's Bird-Dog and Stir the Pot prior to beginning more advanced exercises.

Key Points: maintain a capital "T" posture with shoulders level and spine perpendicular to the ground.  Don't let the resistance or cable rotate your torso.  Encourage athlete to breathe normally.

Mastering the Chop prior to the Lift or other more advanced core lifts in important as it provides for a good understanding of body position, awareness and handling outside forces while maintaining a stable spine.

Key Points: place your hand on your athlete's head and ask them to push into your hand to ensure they have good posture and a tall spine.  Progression much like the Anti-rotational press starts in a tall kneeling position, to a half kneeling position, and finally to a standing positon.

Most athletes have trouble understanding body position and thus mastering the Chop prior to the Lift is key in developing appropriate rotary resistance strength.

Key Point: Lift should be broken down into two distinct components during the teaching phase. 1. pull towards mid-line, and 2. press away (I like to remind our basketball athletes to finish strong as if they were powering up with the ball towards the hoop).  Maintain tall posture and capital "T" position throughout.

Looks a lot like Dwight's about to do a dynamic lift pattern doesn't? 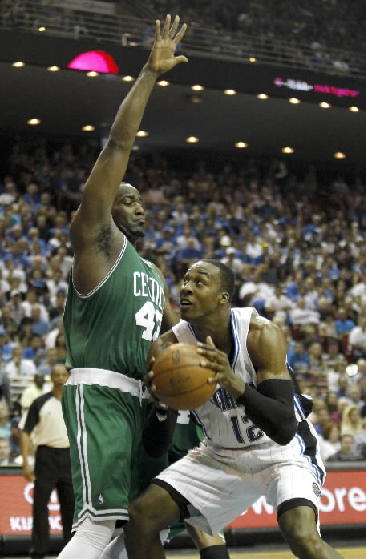 Besides a variety of medicine ball throws which incorporates producing force, the landmine is the last in the progression to resisting rotary forces. Posture, technique and breathing are key here as well.

Anti-rotation exercises don't have to be exclusionary of eachother and can be programmed either within the same training session or within the same week and do not necessarily have to follow the progression outlined above.  However, strict attention should be given to your athlete's ability to reduce motion/force, not produce it.  Lowering the outside resistance on either a Keiser or weight machine will allow your athletes to maintain proper position and ensure your athletes success while resisting rotary forces and preparing them to do the same on the court.  However, demonstrating clearly that your athletes are first able to begin this progression starts with qualifying your athlete's ability to do so with a simple Prone Touch.