Many athletic trainers and strength coaches will prescribe glute med work in their programs whether it be for rehabilitation, activation exercises before training or simply as part of an athlete's maintenance work - yet many of the problems for which we prescribe this work continues to show its ugly head during the basketball season.

Lets take a closer look at the work we are doing for the gluteus medius and what we might be missing in our athlete's program. Hip Abduction Strength Test
• The patient is side lying with test leg on top.
• The therapist stands behind the patient and stabilizes with one hand at the hip, proximal to the greater trochanter.
• The other hand applies resistance across the lateral surface of the knee.
• Patient abducts hip against downward resistance
• If the patient is unable to perform the test side lying, place them in a supine position and feel for a gluteus medius contraction as they attempt to abduct their legs along the table.
• Note: During side lying hip abduction testing, Wilson (2005) points out that athletes “with weak hip abductors will attempt to compensate by recruiting their tensor fascia lata (flexing their hip), their external rotators (lateral pelvic rotation), or their quadratus lumborum (“hiking” their hip).” 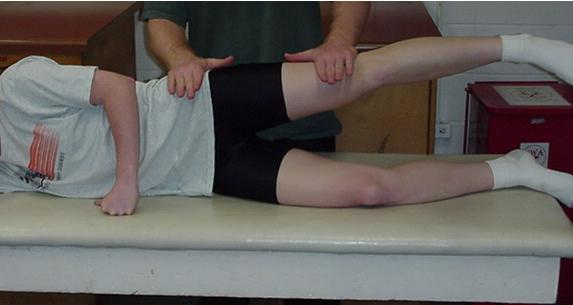 • Patient Position: Standing with weight evenly distributed between both feet.
• Lower patient’s shorts to the point that the iliac crests or PSIS is visible.
• Examiner Position: Standing, sitting, or kneeling behind patient.
• Procedure: The patient lifts the unaffected leg, standing on the affected leg.
• Positive Test: Pelvis lowers on the non-weight-bearing side.
• Implications: Insufficiency of the gluteus medius to support the torso in an erect position, indicating weakness in the muscle of decreased innervation. 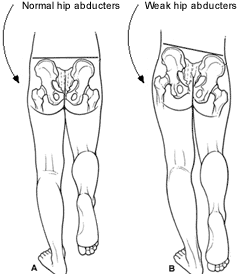 Why we do what we do

Presswood et al (2008) state that “a weak or dysfunctional GM is linked to numerous injuries of the lower extremities and abnormalities in the gait cycle.” (p 41) The authors cite past research that implicates a weak/dysfunctional gluteus medius in Trendelenburg gait (see above), lower back pain, Iliotibial band syndrome, patellofemoral pain syndrome, ACL tears and other knee injuries, and ankle injuries. (p 42-43)

During walking if a person’s GM, on either side, is weak the hip of the leg currently in the swing phase of walking will drop tilting the pelvis laterally. (See Trendelenburg Test above for more information) Presswood et al state that this will reduce gait efficiency and may lead to decreased running speed, and possibly lower back pain since that pelvis is not stabilized properly during activity. (p 42)

(Weak and inefficient Glute Med. on the basketball court = ENERGY LEAK during Cross Over Dribble.  Want to move in the front plane more efficiently?  Train the Frontal Plane.)

Research published by Nelson-Wong et al (2007) showed that, “Muscle activation patterns at the hip may be a useful addition for screening individuals to identify those at risk for developing low back pain during standing.” (p 545) Twenty three subjects, 12 men and 11 women, were made to stand in a constrained position for 2 hours while their hip muscle activity was monitored. 65% of those studied developed low back pain during the test, and 76% of those subjects had reduced GM activation.  Additionally, Nadler et al (2001) showed that hip muscle imbalance, specifically with GM weakness, was strongly associated with low back pain in female athletes.

Khaund and Flynn (2005) state that IT band syndrome “is caused by excessive friction of the distal iliotibial band as it slides over the lateral femoral epicondyle during repetitive flexion and extension of the knee resulting in friction and potential irritation.” (p 1545) Key clinical recommendations in this article are that hip abductor weakness can contribute to IT band syndrome, and that strength training emphasis needs to be placed on the gluteus medius. (p 1546) The authors go on to cite research by Fredericson et al (2000) that concluded that, “Long distance runners with ITBS have weaker hip abduction strength in the affected leg compared with their unaffected leg and unaffected long-distance runners. Additionally, symptom improvement with a successful return to the preinjury training program parallels improvement in hip abductor strength.” (p 169)

Presswood et al (2008) cite research that defines PFPS as “an overuse injury characterized by anterior knee pain, often aggravated with stairclimbing, squatting, or sitting for prolonged periods of time.” (p 42) The authors go on to state that “inhibition or dysfunction of the GM may contribute to decreased hip control, allowing greater femoral adduction and/or internal rotation. This produces a larger valgus vector at the knee, increasing the laterally directed forces acting on the patella and contributing to the patella tracking laterally.” (p 42)

Nakagawa et al (2008) set out to study the effect of strengthening PSPS diagnosed patients’ quadriceps along with the hip abductors and lateral rotators (intervention) vs. just strengthening the quadriceps (control). Only the patients who were in the group strengthening the hip abductors and rotators improved their perceived pain symptoms. The intervention group not only had a reduction in pain, they also had increased knee extension torque and GM EMG activity. The control group’s only change was an increase in knee torque.

Presswood et al (2008) states that excessive “knee valgus or rotation of the femur during landing is a potential mechanism for ACL injury.” (p 43) The authors go on to say that athletes with a high level of GM control and strength are better prepared to counter these movements. In addition, female athletes have a 6-8 times greater chance of ACL injury, possibly due to increased “knee valgus and/or hip rotation [relative to] male athletes.” (p 43)

Shimokochi et al (2008) searched for literature regarding noncontact ACL injuries between 1950 and 2007, to ascertain possible mechanisms of injury. After finding and analyzing 40 articles meeting their criteria, the authors’ main conclusion was that ACL “injuries often happen when an individual attempts to decelerate the body from a jump or forward running while the knee is in shallow flexion angle. At the time of injury, combined motions such as knee valgus and knee internal-external rotation are often noted.” (p 406) They also noted that the ACL is “loaded with anterior tibial shear forces. Unopposed quadriceps muscle forces produce anterior shear forces, possibly damaging the ACL, especially near full extension.” (p 406) These conclusions support the need for not only proper GM function to avoid ACL injuries, but also the need for proper hamstring strength and function to counteract overt quadriceps dominance, along with excessive knee valgus and rotation.

Friel et al (2006) tested a group of 23 people, ages 18 to 52 years old, with a history of at least 2 ankle sprains to the same side with no injury to the other side, and no traumatic lower extremity injury with 3 months. The study found that the strength of the hip abductors on the previously injured side was significantly reduced compared to the uninvolved side. Based on past research the authors stated that “After lower limb ligamentous injuries, dynamic postural control of the lumbopelvic hip complex decreases.” (p 76) Coupled with past data and results of the current study, the authors concluded that if a person’s hip abductors are weak they will be unable to counteract normal lateral sway during gait, which can potentially lead to ankle injury.

Additionally, Beckman et al (1995) studied the reflex latency response of hip and ankle muscles during ankle inversion. The authors concluded that subjects with ankle hyper mobility had decreased latency (the gluteus medius fired prematurely) of hip activation after ankle inversion. The researchers hypothesized that this was a protective measure coordinated by the body’s motor neurons that compensate for the hyper mobile ankle, and they concluded that clinicians must address altered hip muscle recruitment patterns in patients with ankle sprains.

Suggestions for Improving Function and Strengthening the Gluteus Medius

Presswood et al, in the authors’ review of past gluteus medius literature, state that generally patients are “prescribed open-chain or single-leg stance exercises to initially strengthen the GM in a side-lying or weight-bearing position. Closed chain exercises are introduced during the later stages of rehabilitation, once basic strength has been developed.” (p 44-45)

In reference to sets, reps, and frequency, the authors go on to cite a position statement by the American Council of Sports Medicine states that “at least 2 training sessions a week that involve 2 to3 sets of between 6 to 15 repetitions per set will lead to considerable increases in muscular strength and endurance.” (p 50) However, every patient is different, so the authors go on to reference the book, Techniques in Musculoskeletal Rehabilitation (McGraw-Hill Profession, 2001), and state that “for rehabilitation, strengthening exercises should be performed on a daily basis initially, with the number of repetitions and sets controlled by the patients’ level of pain, swelling, and response to exercise. As healing progresses, the muscle can be exercised every second day so the frequency becomes 3 to 4 times per week. Thus the exact loading parameters would appear to be dependent on the person’s injury and may vary between individuals.” (p 50)

With this in mind, the main goal of a GM strengthening program is to progressively overload the muscle so that it continues to develop muscular strength, control, and endurance. Review the article “Gluteus Medius: Applied Anatomy, Dysfunction, Assessment, and Progressive Strengthening” by Presswood et al as a starting place for more details.

Click below to view Uncommon Gluteus Medius Strength Exercises that you wish you were doing.

So what does this all mean and how does this apply to Basketball perforamance and health?

1. A strong and efficient GM is important in maintaining a healthy basketball athlete - Low back pain, knee pain and ankle problems (smells a lot like what keeps basketball athletes from playing the most doesn't it?) are all affected by GM dysfunction and weakness. Filling this gap in their training and maintenance program is the first step in keeping them on the floor.

2. Basketball = Knee Pain (or at least it used to).  At one time basketball athletes were condemned to live out their careers with chronic knee pain because, "thats just part of the sport."  With the work of Powers, Ireland and others, knee pain can be addressed by first attacking the hip (Charlie Weingroff presented on the importance of the Vertical Tibia and Knee Pain at this past year's Basketball Specific Conference ) and specifically addressing the GM. So turn off your ultrasound machines and get back to some good old fashion hip strengthening exercises.

3. Performance: a strong GM along with a trained and efficient Quadratus Lumborum/Obliques (lateral line) makes change of direction specifically in the frontal plane much more explosive and with less energy leakage enabling your athletes to move left to right at the speed of light.

Next week: Why all your glute med work still isn't working - The missing piece