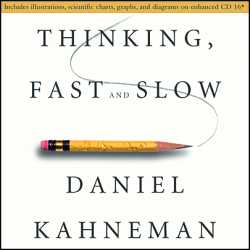 "Baumeister’s group has repeatedly found that an effort of will or self-control is tiring; if you have had to force yourself to do something, you are less willing or less able to exert self-control when the next challenge comes around. The phenomenon has been named ego depletion. In a typical demonstration, participants who are instructed to stifle their emotional reaction to an emotionally charged film will later perform poorly on a test of physical stamina – how long they can maintain a strong grip on a dynamometer in spite of increasing discomfort. The emotional effort in the first phase of the experiment reduces the ability to withstand the pain of sustained muscle contraction, and ego-depleted people therefore succumb more quickly to the urge to quit. In another experiment, people are first depeleted by a task in which they eat virtuous foods such as radishes and celery while resisting the temptation to indulge in chocolate and rich cookies. Later, these people will give up earlier than normal when faced with a difficult cognitive task.

The list of situations and tasks that are now known to deplete self-control is long and varied. All involve conflict and the need to suppress a natural tendency. They include:

Avoiding the thought of white bears

Inhibiting the emotional response to a stirring film

Making a series of choices that involve conflict

Trying to impress others

Interacting with a person of a different race (for prejudiced individuals)

The list of indications of depletion is also highly diverse:

The evidence is persuasive: activities that impose high demands on system 2 requires self-control, and the exertion of self-control is depleting and unpleasant. Unlike cognitive load, ego depletion is at least in part a loss of motivation. After exerting self-control in one task, you do not feel like making an effort in another, although you could do it if you really had to."