Choose the RED Pill and Join Us at BSMPG 2014 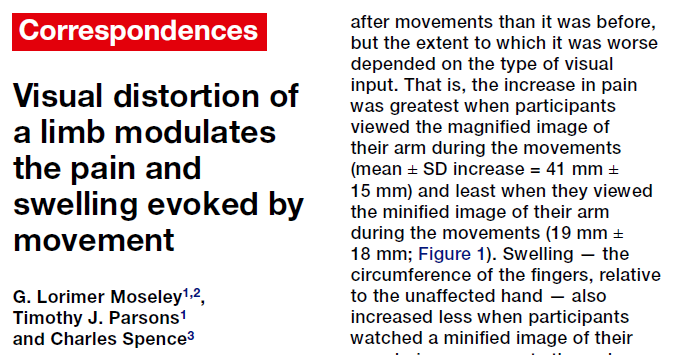 "Here we report that, in patients with chronic hand pain, magnifying their view of their own limb during movement significantly increases the pain and swelling evoked by movement. By contrast, minifying their view of the limb significantly decreases the pain and swelling evoked by movement. These results show a top-down effect of body image on body tissues, thus demonstrating that the link between body image and the tissues is bi-directional.

Ten right-handed patients with chronic pain and dysfunction of one arm participated in our study (see Table S1 in the Supplemental data available on-line). Patients watched their own arm while they performed a standardized repertoire of ten hand movements, at a set speed and amplitude, and in randomised and counterbalanced order. Four randomised conditions involved different ways of looking at the arm: Control (looking without any visual manipulation); Clear (looking through binoculars with no magnification); Magnified (binoculars with 2x magnification); and Minified (inverted binoculars). The patients’ pain (on a 100 mm visual analogue scale) was worse after movements than it was before,but the extent to which it was worse depended on the type of visual input. That is, the increase in pain was greatest when participants viewed the magnified image of their arm during the movements (mean ± SD increase = 41 mm ± 15 mm) and least when they viewed the minified image of their arm during the movements (19 mm ± 18 mm; Figure 1). Swelling — the circumference of the fingers, relative to the unaffected hand — also increased less when participants watched a minified image of their arm during movements than when they watched a magnified image (p < 0.01), or when they viewed their limb as it normally appears (p < 0.02). Recovery to pre-task pain was slowest when the visual input during movements had been magnified but quickest when it had been minified (Figure 1B; see Supplemental data for statistics). Two patients terminated movements in every condition because of intolerable pain and two other patients terminated movements because of intolerable pain in the magnified condition only (Figure S3 in the Supplemental data). These results support the hypothesis that making a limb look bigger increases the pain and swelling evoked by movement. Remarkably, they also demonstrate that making a limb look smaller decreases the pain and swelling evoked by movement." 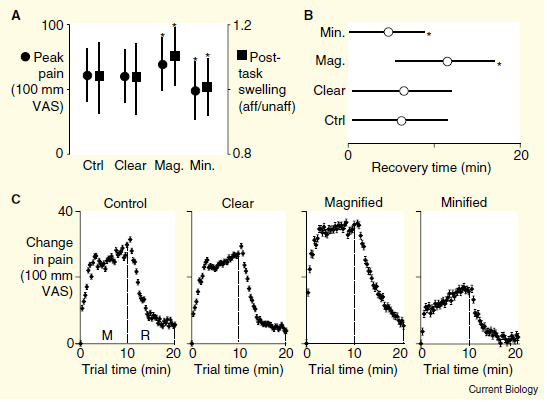 "The obvious clinical implication is that if manipulation of visual input can reduce the pain and swelling evoked by movement, it may assist in the rehabilitation of acute and chronic physical, neurological and psychiatric  disorders associated with certain body image disturbances. Regardless of the mechanism(s) underpinning the effect, modulation of pain and swelling via distortion of vision establishes that the link between pain and tissue condition on the one hand, and distorted body image on the other, is a bi-directional one. The result also suggests that the manipulation of visual input might lead to novel clinical applications, should the reduction in swelling and pain following the viewing of the affected limb through a minifying lens demonstrated here be shown to lead to longer-term beneficial effects in future research.

Join us at the 2014 BSMPG Summer Seminar and travel down the rabbit hole of Elite Sports Medicine and Performance Training - your patients, athletes, and clients will thank you! 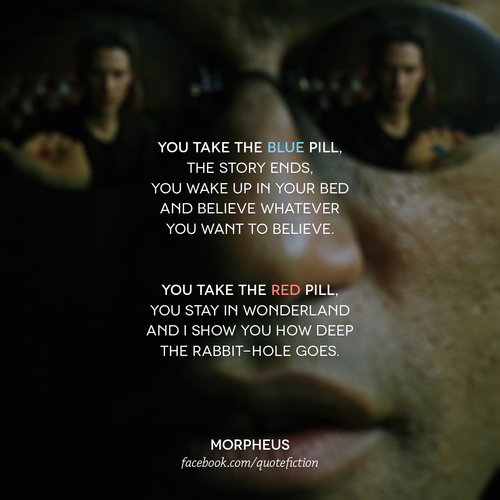