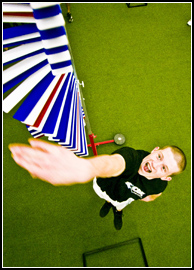 Participants indeed reached higher rungs when they adopted the external focus (on average 4.79 rungs) compared to the internal focus (4.12 rungs) or when they received no attentional focus instructions (4.10 rungs).  Also the time they spent in the air was longer under the external (0.491 s) than under the internal focus (0.477 s) or the control condition (0.478 s)  Thus a change in the focus of attention significantly affected reach height: Focusing on the object to be touched resulted in more effective performance than did focusing on the finger with which the object was to be touched.  Perhaps most interestingly, instructing the participants to adopt an external focus increased jump height above and beyond what participants achieved under “normal” conditions (i.e., control conditions without instructions).  These results were recently replicated by Carolina Granados in my lab (Wulf, Zachry, Granados, & Dufek, 2006, Experiment 2).  In addition to looking at reach height, Granados calculated the displacement of participants’ center of mass during the jumps.  Interestingly, she found not only the greatest reach heights under the external focus condition, but also greater vertical displacements of the center of mass (0.51 cm) compared to those in the internal focus (0.47 cm) and control conditions (0.47 cm).

These findings might seem surprising given that one might expect the jump height to be determined mainly (although not exclusively) by the participant’s strength.  Yet we also know, for example, that the coordination between and within muscles influences maximum force production as well (Hollmann & Hettinger, 2000).  It is possible tha an external focus optimizes those coordination patterns.  While we have to await further research to find out how exactly the attentional focus instructions affected jump height, the findings of this study could have implications for sports in which maximum forces must be generated in a short periods of time (e.g., high jump, long jump, pole vault, basketball layup).  In those cases, focusing on the target (e.g., the bar in the high jump) might also result in more effective performance than focusing on movement coordination or not focusing on anything in particular.” Pg 58-59

“The studies we have reviewed in this chapter confirm the anecdotal observation (in windsurfing) that the performance of motor skills seems to be more effective if one focuses on the effects one’s movements have on the environment rather than on the movements themselves.  The results from studies using various laboratory tasks as well as sport skills provide converging evidence for the advantage of instructions that induce an external relative to an internal focus.  The benefits of an external focus appear to be even more pronounced if the movement effect occurs at a distance from the body, thus making it more easily distinguishable from the body movements that produced it.  Furthermore, this effect seems to be rather general and not dependent on individual preferences.  In fact, performers often notice immediate changes in their performance as a function of their focus of attention.  Importantly, the effects of adopting an external focus when practicing a skill is not just temporary, that is, present only when the individual adopts that focus; rather, these benefits are seen in the retention of the skill and in transfer to novel variations of the skill.” Pg 77

Focus your attention to the 2013 BSMPG Summer Seminar - Where the top Sports Medicine and Performance Professionals meet every year!