This past June 4th I travelled to the Perform Better Seminar in Providence Rhode Island with the sole purpose of attending Al Vermeil's lecture and hands-on demonstration entitled Speed: The Ultimate Weapon.  Needless to say, Al's simplistic approach to speed development forced me to look at my own programming and forced me to rethink some of the approaches I have taken in the past.

"If you can't get into first gear, you have no chance of getting into third gear" - Al Vermeil

It's as simple as that. Strength rules. If you can't put force into the ground, you'll never be able to move forward, or for that matter in any direction quickly.  Ray Eady from the University of Wisconsin has been preaching this simple, yet overlooked concept for years now. 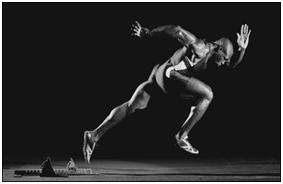 Below are a few take home notes worth reviewing:
1. Don't progress your athlete to a next phase or exercise until they have mastered the previous. You wouldn't allow a kid out of first grade before they could read at a first grade level would you? (that actually happens a lot more than you think but that's for another talk).  Some athletes NEED to work at a skill for six weeks while others only need three weeks to master the same movement. Do not progress them until they are ready.

2. Starting norms for male and females.  If your athlete lacks the "burst" in their initial acceleration, strength deficits should be looked at as a possible contributor.
a. Males should be able to squat 150-200% their body weight
b. Females should be able to squat 140-180% of their body weight
c. ** remember you can't get to third gear if you can't get out of first gear. Strength and starting strength are absolute prerequisites before other, more advanced training modalities.

3. Jump progression as demonstrated by Coach Vermeil
a. Box jump from a static position
b. Box jump with countermovement
c. Light med-ball between 4-6 lbs held at chin or in shooting position into box jump
d. One step box jump
e. Standing long jump
f. jumping up stairs - athlete must be proficient at box jumps prior however
g. Medicine Ball (MB) Throws emphasizing triple extension of the hip, knee and ankle.
i. MB throws under chin for horizontal distance forward
ii. Underhand throws
iii. MB throw under chin for vertical distance
iv. ** remember: progression is key: we all have to graduate from grad school before joining cool kids in high school.

4. For BIGGER athletes, have them jump up hill to reduce landing forces and avoid injury.

5. Anyone can make someone sore and tired.  Proper planning is key and if you can improve someone's speed you've also automatically improved their power, strength, elasticity, relaxation, etc.

If you get a chance to listen to coach Vermeil speak in the future do so! No one has as much coaching experience (as well as coaching mistakes - as coach so easily admitted) than Coach Vermeil. 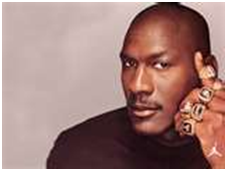 Did I mention he has a fist full of NBA championship as well?