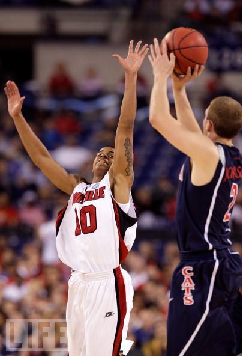 In basketball we call it false hustle.

You run towards a shooter and instead of closing out under control with a high hand toward their strong hand you jump aimlessly by their fake shot attempt landing in the first row of fans effectively taking you out of that play, and also the two to three rebounding opportunities that followed because you didn’t have the discipline to sit down and approach the shooter under control.

Ya, it looked good as you showed off your 34 inch vertical, and the freshmen fans in the first row will be talking about how you landed in their popcorn for the rest of the net, and perhaps the school’s photographer will even take a picture of you because it makes for a good story, but the score at the end of the game will essentially show your lack of commitment to the little things.

In business, it’s called Core Values. It’s what you stand for and it’s also what you should never stray from. Yes, it may be tempting to add some new equipment to your weight room or sports medicine area after attending a trade show or because you saw major university “X” has it, but unless it falls within your core values it’s better left on the trade show floor instead of becoming an overpriced and oversized coat rack in your working area.  Of course the way in which you do things, will often change (due to new research and evidence) but that’s clearly different from your core values which should never change.

Sitting down and guarding, like great patient care should never change.