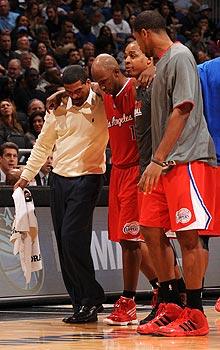 The NBA has lost another of its premiere players to injury.

Chauncey Billups has suffered a season-ending, and most likely a career-ending Achilles tendon injury.

Although the majority of us are really happy that the NBA is back, that players and owners were able to come to a working agreement after a long locked out summer, and that each night is saturated with NBA games - at what cost has this condensed season with multiple stretches of back-to-back games come at?

It’s of little surprise that one of the NBA’s greatest floor generals suffered a non-contact Achilles injury Monday night after a shortened and hastened pre-season after a similar trend was discovered this past pre-season in the NFL after a similar lockout scenario.

Did the NBA not learn anything from the NFL and the result of its shortened pre-season where Achilles injuries were recorded at a 4x greater rate?

Of course there are a number of factors that may have contributed to Billups’ tendon failure: his age, prior injury, or the incredible number of minutes played over his 14-year career, but one cannot ignore the similarities between the previously published NFL data and the current injury trend emerging in the NBA this season.  Unfortunately for the NBA, what might ultimately be the Achilles heel for this year’s season and what we may all ultimately remember it for, might just actually be the Achilles after all.