Solving the Mystery of the Pelvic Rotator Cuff - A MUST READ 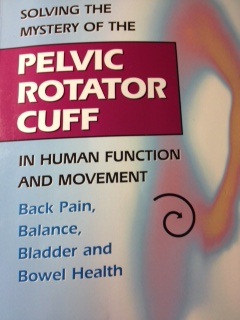 Solving the Mystery of the Pelvic Rotator Cuff

Think the diaphragm is just for breathing? Think again.

At just over 140 pages, this day read will have your entire rehabilitation and strength programming going from good to GREAT!

“The breathing diaphragm, abdominals (particularly transverse abdominus), latisimus dorsi, gluteals, and multifidus are integral in optimal PRC function. They are not directly part of the PRC but function in an integrated system of support and to facilitate bladder and bowel function, lumbosacral stability, balance and ambulation.

The breathing diaphragm rests in a dome shape at the top of the abdomen attached to the lower ribs, sternum and lumbar spine. In diaphragmatic breathing, the diaphragm descends and returns to the rest position 12-14 times per minute each minute of each day. This action helps maintain the optimal pH of all body fluids and optimal oxygen-carbon dioxide balance.  It gently mobilizes the thoracic and lumbar spine,12-14 times per minute. In addition to these important benefits, the breathing diaphragm movement massages the sympathetic nerve roots as they exit the thoracic and upper lumbar vertebrae. It functions as a pump for blood and lymph circulation with the pelvic organs and related structures.  The major organs of the trunk are suspended from the breathing diaphragm either directly or indirectly so the rhythmical movement of the diaphragm helps maintain normal mobility of these organs, and lifts the bladder 2-3 centimeter during the exhalation phase of breathing. There is evidence that they breathing diaphragm in conjunction with the transverse abdominus assists in spinal stabilization by increasing the intra-abdominal pressure during limb movement according to Richardson et al (1999). There is evidence of synergistic contraction of the breathing diaphragm, transverse abdominus, and pelvic diaphragm muscles, as described by Hodges and Richardson (1996). Diaphragmatic breathing is essential  for spinal health, bladder and bowel health, and standing balance.  Diaphragmatic breathing is the first exercise to implement in order to achieve spinal and bowel/bladder health.”