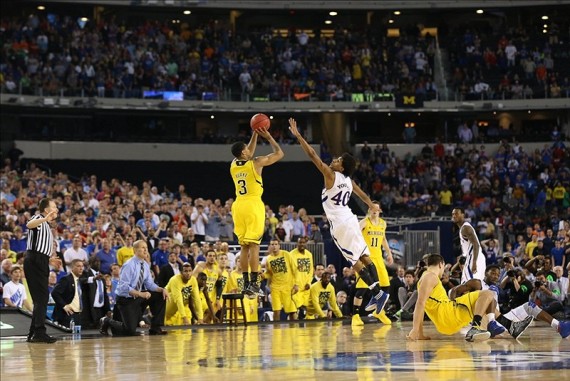 Trey Burke’s heroics may not have been the only thing that led to Kansas’ loss to Michigan in the 2013 Sweet 16.

A scientific study by a group of KU researchers confirms what many might have already assumed: Stress — both on and off the court — affected the Jayhawks during the most crucial point of the season.

So what did they find out about KU’s players? And could this change how basketball is played for years to come?

When strength and conditioning coach Andrea Hudy first told Traylor and his teammates they’d be popping a cotton ball in their mouth every Thursday to collect saliva and check their stress levels … well, Traylor’s imagination went a little crazy.

“We were just all thinking, ‘Man, what if we’re tired, but the cotton balls say we’re not tired? Coach is going to go harder on us,’” Traylor said with a laugh. “Crazy stuff like that.”

In actuality, Hudy wasn’t looking for a way to pick on her players — or even immediate results.

After consulting with Fry — a professor in KU’s department of health, sport & exercise sciences — Hudy had volunteered her basketball players to be part of a funded study that would test their hormone levels for each week throughout the season.

The testing was simple: Put a cotton swab in your mouth for two minutes, let the saliva soak in, then drop the swab in a tube for sampling.

KU’s players were tested for 27 out of 30 weeks, starting with the preseason and ending two weeks after their Sweet 16 exit. This season-long study provided comprehensive data on hormone levels in basketball players that had never been published before, even by professional teams.

When the season was over, Andre spent 4-6 hours studying each individual player’s samples, starting an uninterrupted process that included spinning them in a centrifuge.

The final goal was this: Find out the testosterone-to-cortisol ratio of each player for each week — a number that would determine when KU’s players were stressed the most.

Cortisol levels have been a recent hot topic in sports study, as at a base level, the hormone is catabolic, meaning it tears down muscle.

Because each person has a different baseline, however, cortisol is best tested when compared to a person’s testosterone level.

“If testosterone plummets and cortisol is up, then you have a problem … mood, performance, everything,” Hudy said. “But with cortisol down and testosterone up, you could rule the world.”

Andre was about to find out that the Jayhawks did have times when they were rulers of the world … just not during the most important stage of the season.

You Can't Manage What You Don't Measure