Since the inception of BSMPG we have featured a number of books, resources, and professionals that we believe are changing the way we practice sports medicine and performance training right before our eyes.  One such professional is Cal Dietz from the University of Minnesota.

Personally, there are only a few strength coaches that I follow closely and that have influenced my development in both sports medicine and sports performance; and then there is Cal Dietz.

See a portion from Cal's new book below which will be released later this week - a must have for all those that take performance training seriously!

See Cal speak at the BSMPG summer seminar May 19-20th in Boston MA. 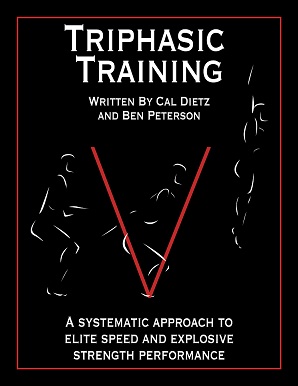 Transferring Force and Improving Performance Through the Foot and Ankle Complex

Over many years of coaching I have witnessed athletes who have made tremendous gains in knee and hip flexion and explosiveness in their training, yet this training time and advancement never seem to transfer into training results for testing. Then one day about 8 years ago I was able to spot the main reason why all this newly developed athletic potential and speed did not transfer over into testing. The question arose with several athletes I made much stronger in the knee and hip joint, along with explosion from those various joints. However, in testing the athletes’ 10 and 20-yard dash we didn’t see the results that we anticipated based on their gains everywhere else in the weight room and/or vertical jump. When we tested one particular athlete we saw no advancements in the 10 and 20 yd dash, which was a huge concern and misunderstanding on my part. I realized at this point that I must dig into this to its fullest extent.

As I reviewed the tape of the athlete running the starts in the 10 and 20 I was able to spot something that was of key importance. The original reason I was video tapping was to rectify some technical flaws that could improve the 10 and 20 times, but since this athletes was a hockey player, just by practicing the skill he got much better. Anyone that has ever trained a hockey athlete for running realizes how poor the technique often is when they start coming right out of the season. What I saw on this day was that as the athlete's foot struck the ground on the second step I saw that the heel lost 2-3 inches from the point when the toes hit the ground. When I say “lost” I mean there was a reversal of direction of the center of mass in the body and the heel thus, became closer to the ground. This indicated a loss of power being, incapable of helping the athlete run faster.

I then reversed the tape and looked at the first step and the same thing was happening with the athletes out of the initial start. I realized what had taken place: I made the hip and knee joint much more powerful and stronger, but the ankle joint (being a hockey player) couldn’t absorb the force from the knee and hip. It was as if all the athletes had been running their times on sand. Since I made the hip and knee stronger the ankle, the weak link in the chain, was unable to absorb the force that dampened the stiffness qualities and those particular testing results By addressing the ankle complex weaknesses that existed to absorb the force and power we were able to within one week make the ankle complex strong enough to withstand the foot striking the ground.

This can often be seen in a number of populations. The aforementioned example of hockey players is obvious because they spend most of the season in the boot. Basketball players are often suspect because their ankles become weakened in the season due to the excessive taping and braces that they wear. I‘ve seen throwers(shotput and/or discus) have this coming across the ring as they change directions. This technique flaw often happens when they start to spin and transfer across the rear of the ring to the front of the ring. You will see their ankle give and at that point many gains can be made in speed and quickness in the ankle and foot.

One must have a full understanding of the foot/ankle complex and its functions many athletes demonstrate dysfunctional patterns in the said area. Hopefully you have a good medical staff that can manipulate the foot (Or are willing to learn if they can’t) to better transfer this force into the ground such that performance improves. Fortunately, I have been able to learn a number of techniques to help manipulate the foot so that it functions better. Without functioning correctly you will never get the entire benefits of the training program.

Let’s first look at the basic functions of the ankle foot as it’s used in sport. As the foot strikes the ground, whether during acceleration or at top speed, near the small toes as it tries to find the ground. What then occurs is a transfer of forces from the small toes over to the big toe at push off. The transference is utilizing the size and strength of the big toe in running; this action must be used in all movements in training. So keep in mind that in every possible  action you must use a few key coaching points/actions with your athletes:

1.  Focus on pushing through the big toe
You will see a huge improvement in their  jumping ability if you add this one component to your jumping/plyometric programs. Also, in any weight lifting movement that applies extension of all three joints (at a slow or high speed) this also must be implemented to transfer weight room performance to the field. So, in your cleans, cue the athletes to push through the big toe at the top of the pull. This is not recommended for Olympic weight lifters; however, for sports performance it would be highly recommended. The walking lunge is another example of how this should be implemented. As an athlete would push and finish off the movement at the top, all the forces must be transferred off the foot to the big toe to strengthen it and emphasize its mobility and strength at the range of motion.

2. Calf raises for sport training should be done explosively with a knee bend.
That knee bend must be timed with the extension of the foot at the top when completing the exercise. The feet sometimes misfire on the timing at the beginning of sporting movements, but remember it is an absolute necessity to transfer all the actions on the joint to the sporting field. Bodybuilders would not want to implement this. Athletes should execute this exercise at the end of the a training cycle in the last 4-6 weeks. Just completing heavy loads without the knee bend would be fine, but keep in mind you must always finish with the explosive knee bend calf raises, being sure to push through the big toe at the top.

No matter what sport you play, if it involves movement with the legs, you must constantly coach the athletes up on these finer points of foot function. Essentially, what happens is they’re losing all the potential power from the main two joints of explosion and not transferring it onto the speed on the field. I’ve seen too many athletes underutilize their potential and have a simple biomechanical problem that can’t be transferred over because of one joint in the kinetic chain in applying power and force to the ground. You lose so much potential.

Having your squatting potential transfer to the sporting field to optimize results:
Many athletes and/or coaches use an Olympic or powerlifting style squat when they are performing front and back squats when training for sport. Let’s keep in mind that these are all excellent exercises in gaining strength for athletes to become faster and more explosive. Please keep in mind that I use these various techniques throughout the year, but you can’t get the greatest sport results by not changing up these methods once your athletes have become strong enough. When making this statement one must realize that you can’t keep squatting heavier and heavier and have performance keep improving. This has never been the case with any athlete that I’ve seen. You must have a level of strength that is high enough to perform the task at hand. Once the strength has been developed one must use more sports specific methods to transfer the gains made from the Olympic and power-lifting squat over to the field.

This is where the “sport back squat” comes into play. The sport back squat essentially is taking your wider stance squat and moving the feet of the athlete to a very narrow position (shoulder width or slightly within/outside based on size). The reason for this is that during the majority of performances the athlete completes the feet will be in this position. To facilitate the transfer and strength gains from the Olympic and power lifting style back squat, the last 4 to 6 weeks of training (potentially longer during the in season) would use the sport back squat to get the most specific position of your feet when squatting.  Some things change in this particular style of squat, especially with athletes that have a long thigh bone; they will not be able to go as deep as before as in the Olympic or power lifting style back squat. Keep in mind when you switch from the Olympic or power lifting style back squat to the sport back squat that you most likely wont have your athletes go as deep for biomechanical reasons. So realizing that your athletes wont go as deep you must increase the glute and hamstring work in your programming because you will not be utilizing the hamstring and glutes as much as you would in the deeper Olympic and power squats.

Many people often ask, “Well is not squatting deep the ideal thing for my athletes?” I would say unless they are going into some type of squatting competition not to worry about it because in sport they rarely ever get into that deep of a position; also, they will not lose much strength in regard to squatting during the transition time utilizing the sport back squat, which again should be the last 4 to 6 weeks of your training cycles to get optimal transfer of sports performance. Dr. Bondarchuck rarely ever squatted his athletes that deep because they never went into those deep positions in their throwing movements. He felt that squatting at the angles that they would compete at was optimal and got the best results. His results speak for themselves, being arguably the greatest coach in the history of the summer games. Just remember when utilizing the sport back squat one can also come up with some very specific glute and hamstring exercises to help your athletes transfer into their sporting event.