When You Need To Develop POWER

Innovation has been at the heart of Keiser Corporation since its founding in 1978 by brothers Dennis and Randy Keiser. The company revolutionized fitness and performance training with the introduction of pneumatic resistance-based equipment. In 2005, Keiser Corporation took cardio training by storm when it produced the ground-breaking indoor group-cycling bike, the Keiser M3, which features a unique Eddy Current magnetic-resistance system. During the 2010-2011 fiscal year, the Keiser M3 accounted for one-third of all indoor group-cycling bikes sold in North America and became the undisputed industry leader.

Interested in learning more about how Keiser Equipment can help you?

Schedule a time to meet Don Callahan prior to our seminar by emailing him at donc@keiser.com or join the Keiser crew at Randall Huntington's Lecture and Workshop - Friday May 17th

Huntington is rated as a USATF Master Coach - a coach who has guided multiple medalists in multiple Olympics and World Championships - in the jumps, one of only seven in the U.S. He has been the coach for many world-class track and field athletes over the years, including eight Olympians and seven World Championship Team members. Overall, he has coached and consulted 17 Olympians from various sports. Mike Powell and Willie Banks set world records in the long jump and triple jump, respectively, while under his tutelage. Seven of his athletes have been in the U.S. all-time top ten in their respective events.

Willie Banks, who Huntington coached to the 1988 Olympics, broke the world triple jump record with a mark of 58-11 1/2 (17.97m) on June 16, 1985 in Indianapolis, and under Huntington's coaching twice jumped over 18 meters, which is the longest in American history.

In addition to Powell and Banks, Huntington coached Olympians Joe Greene (long jump bronze medal in 1992), Sheila Hudson (American indoor and outdoor record-holder in the triple jump), Al Joyner, Darren Plab, Tony Nai and Sharon Couch. At least one of his athletes has competed in every summer Olympic Games since 1984. Powell, Greene, Hudson, Couch and Nai were all World Championship team members that he coached, along with Kathy Rounds and Kenta Bell.

From April of 2002 to November of 2003, Huntington was USA Track & Field's first ever Sport Science Technical Coordinator. Recently, he was one of three individuals selected for the master dartfish training program at the Olympic Training Center in Colorado Springs. Huntington has also been a head and assistant coach for horizontal jumps for the ARCO Olympic Training Center in Chula Vista, Calif.

Outside of working with USA Track and Field, Huntington served as Director of Sports Performance for the Bellingham Athletic Club and for Gold Medal Management. He also worked as a research coordinator and training specialist for Keiser Sports Health Equipment for seven years, and was responsible for emphasis in strength training for the aging and use of Keiser in training of elite athletes.

Not limited to just track and field, Huntington has trained professional athletes in other sports, notably football. He served as a conditioning and/or speed consultant for several teams including Indianapolis, St. Louis, Miami, Denver, Philadelphia and Cincinnati, and tutored numerous individual players including Trace Armstrong, Terry Kirby, Henry Ellard and Ed McCaffrey. He has worked with college football programs at Florida, Oklahoma and Notre Dame, and instructed athletes such as Kyle Turely and Grant Wistrom at the NFL combine.

Huntington has worked with some of the most famous athletes in the world, including notable performers such as hockey's Wayne Gretzky, baseball's Gary Carter and Rex Hudler and tennis' Michael Chang.

His previous collegiate experience includes a stint as assistant women's track and field coach at Cal-Berkeley from 1984-86, where he went to a program that had no NCAA qualifiers, and promptly had one qualifier his first year and five his second. He graduated from Oregon, where he served as a volunteer assistant coach for the men's track and field team for five seasons from 1978-83.

BSMPG is proud to announce the return of Bill Knowles as a speaker within the Sports Medicine & Rehabilitation Track at the 2013 BSMPG Summer Seminar - May 17th and 18th, 2013!  Bill joins keynote speakers, Dr. Stuart McGill, Marco Cardinale, Fergus Connolly, Adriaan Louw and Marvin Chun for this weekend event.  With the most thorough and integrated speaker line-up ever assembled, the 2013 BSMPG Summer Seminar will be the WORLD'S most sought after Sports Medicine & Performance Seminar to date!!

BSMPG is proud to bring the face of British Olympic Sport to Boston for the 2013 BSMPG Summer Seminar - May 17th and 18th, 2013!  Dr. Cardinale is one of the world's authority on sport preparation and performance and joins Dr. Stuart McGill as the second keynote speaker for this weekend event.  With the greatest speaker line-up assembled to date, the 2013 BSMPG Summer Seminar will be the WORLD'S most sought after Sports Medicine & Performance Seminar to date!! 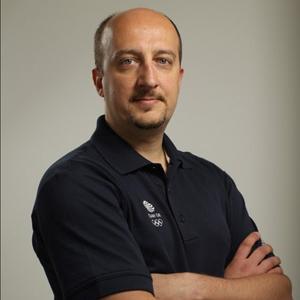 Dr. Marco Cardinale is the Head of Sports Science and Research of the British Olympic Association. Dr. Cardinale is also the director of the Science and Research Unit of the British Olympic Medical Institute based in University College London, Institute of Sport Exercise and Health. Dr. Cardinale led the Sports Science activities for the preparation of Team GB at the Beijing 2008, Vancouver 2010 and London 2012 Olympic Games.

Dr. Cardinale is a former Handball coach and has been involved in coach education in various countries in the area of strength and conditioning and exercise physiology. A widely published and cited author in the scientific literature on various aspects of human performance, he has also patented an innovative exercise device consisting of an vibratory biofeedback system which received research awards from NEStech and the Scottish Design Council.

Dr. Cardinale holds honorary academic appointments at University College London in the division of surgical and interventional medicine, the University of Aberdeen in the School of Medical Sciences and a visiting professorship at the University of Genova. He has been an advisor to various companies (e.g. Polar Electro, Medisport and Technogym), government agencies (e.g. the European Space Agency, UK Sport and Higher Education Funding Council) and professional sport organizations and national governing bodies in 4 countries (USA, Italy, Spain, Sweden) before working in the UK. Dr. Cardinale has been invited speaker in scientific conferences and coaching clinics in 21 countries and has been ad-hoc reviewer for over 15 scientific journals and research grants agencies in the areas of sports science, physiology, biomechanics and bioengineering.

Dr Cardinale holds a B.Sc. from ISEF in Italy, an M.Sc. from the US Sports Academy in the USA and a PhD from Semmelweis University in Hungary.