Join Jose Fernandez and other top Sports Medicine and Sports Performance professionals from across the world as they desend on Boston this May 19th-20th for the 2012 BSMPG Summer Seminar.  Choose from a number of specific learning tracks or mix and match to suit your learning needs.  Keynote speakers throughout the weekend include Dr. Craig Liebenson, Chris Powers, Alan Grodin, Irving Schexnayder, and Bill Knowles.

Register today for this once in a lifetime event! Seats are limited!

Professional athletes are experts at what they do, regardless how many S&C sessions they perform a week, they either have the quality to average 20 points per night or they don´t. From a physical perspective, coaches need to make sure their athletes are healthy and available to play every night. A healthy professional athlete should be capable to display a good performance just by being healthy. Everything else that can be achieved with training is a plus.

In a league where teams have to play 3-4 games a week and take more than 90 flights per season, time is limited for coaches to carry out physical training sessions with their players. A training program must be precise, specific and adjusted to the individual needs of each athlete. Coaches should focus on maintaining and reducing the loss of training adaptations throughout the season while enhancing the recovery and regeneration strategies.

At this year´s BSMPG Conference, I will be presenting ideas on how to objectively profile athletes attending to their neuromuscular characteristics and type of muscle fiber predominance. Continuing with this neuromuscular approach to athlete monitoring, innovative ways to quantify effects and duration of the training and treatments will be discussed. Being able to control the rate at which each muscle gains and looses activation after a training session or how exactly certain therapy treatment affects the functionality of any muscle group is crucial if we want to schedule training actions at the right moment, with the aim to maximize the physical performance and minimize risk of injury during the competition.

From an injury prevention perspective, new concepts to evaluate athlete´s readiness to train and assessment of change in muscle response induced by training will also be suggested, with a clear focus on practicality and applicability.

Aiming for maximal performance is a complex task. The purpose of my presentation is to offer some insight into the analysis of an athlete´s neuromuscular condition and how this can help coaches optimize training in an objective, reliable and time saving manner.

I look forward to seeing you at the BSMPG Conference in May!

BSMPG is proud to announce Joel Jamieson as a speaker within the Hockey Specific Training Track for the 2012 BSMPG Summer Seminar, May 19-20, 2012 in Boston MA. 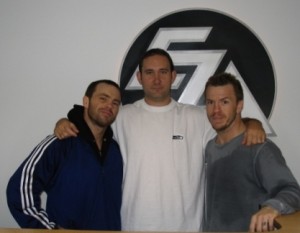 Topic: Allostatis and the Training Process

“If I can see further than anyone else, it is only because I am standing on the shoulders of giants.”

In 2011 BSMPG invited the titans of Sports Medicine and Performance to Boston for the largest conference of its kind, and many attendees left asking the question, "how could you ever top that speaker line-up?" Well, we did. BSMPG is proud to announce May 19-20, 2012 as the selected date for Sports Medicine and Strength professionals to desend upon Boston MA for another monster conference!

So how could we ever top last year's speaker set?

Let's just say that we asked last year's speakers who they wanted to hear and we got em!

Stay tuned over the next few weeks as we reveal our entire 2012 speaker set. As we did last year, this seminar will be divided into three distinct educational tracks including a Hockey focus, a Basketball Focus and a clear Sports Medicine/Rehabilitation Track with Keynote Speakers throughout the weekend bringing each track together for common lectures. Attendees may choose to stay within one track throughout the entire weekend or mix and match to meet their educational needs. Remember to save the date now - you won't want to miss another great summer seminar presented by BSMPG.

A limited number of seats still remain for our DNS "A" course. Sign up now before the last seat is gone!