If you were the average student in the average anatomy class, you were taught that the psoas major was responsible for hip flexion and external rotation of the femur.  If you were lucky, you may have had a minor discussion regarding its role in lumbar stability.

But did your anatomy teacher discuss the psoas as it relates to the diaphram and breathing? What about the psoas and the pelvic floor?

I didn't think so.

Let's take a quick look at what you may have been missing... 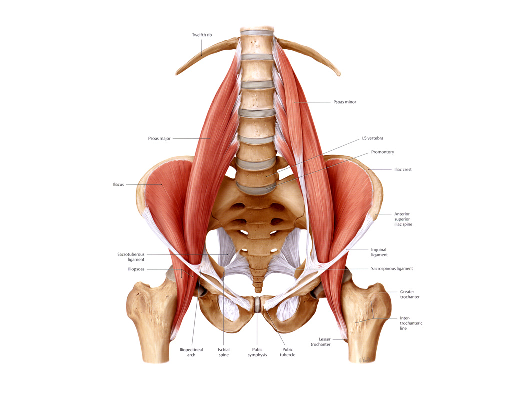 "The fascial relations of the psoas major to the surrounding tissues warrant special attention as these links influence the biomechanics of these interlaced structures. The medial arcuate ligament is a continuation of the superior psoas fascia that continues superiorly to the diaphragm. The right and left crus constitute the spinal attachment of the diaphragm. They attach to the anterolateral component of the upper three lumbar vertebral bodies. The crus and their fascia overlap the psoas major and appear to be continuous with this muscle until they come more anterior and blend with the anterior longitudinal ligament. (8) As the psoas descends, its inferomedial fascia becomes thick at its inferior portion and is continuous with the pelvic floor fascia. (9) This forms a link with the conjoint tendon, transverse abdominus, and the internal oblique. (10) As the psoas major courses over the pelvic brim, the fascia of the posterior fascicles attach firmly to the pelvic brim."

Psoas major: a case report and review of its anatomy, biomechanics, and clinical implications by Sajko, Sandy & Stuber, Kent. Journal of the Canadian Chiropractic Association, 2009.

Discover what you've been missing and what the leaders in Sports Medicine and Performance already know at the 2013 BSMPG Summer Seminar - May 17 & 18, 2013 in Boston.